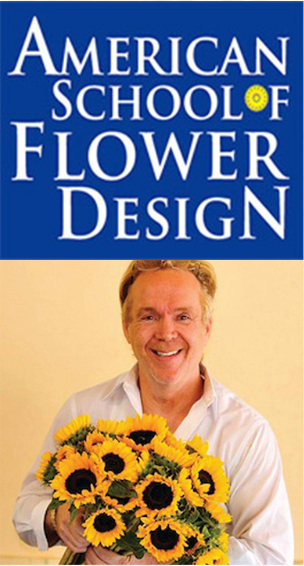 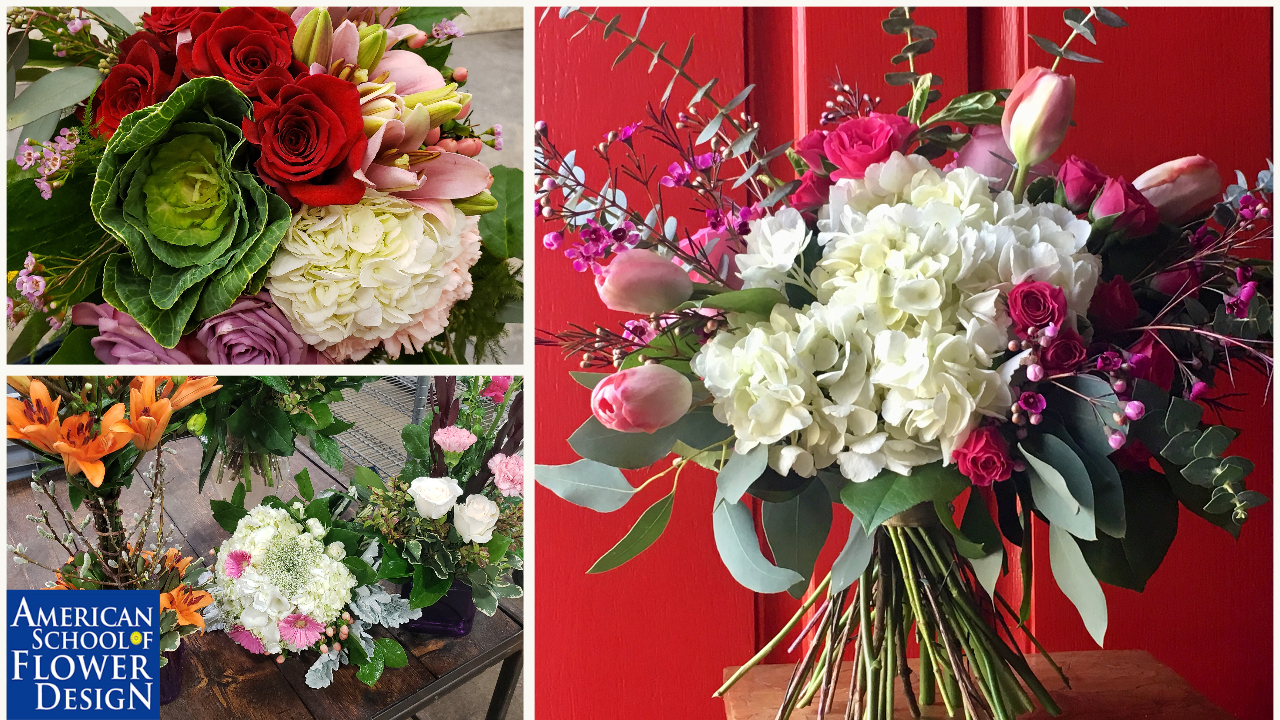 Welcome to Spring. Spring is a time when flowers start blooming and remind us we made it through another Winter. We’ve also been greeted by a worldwide pandemic. Upcoming classes are being canceled until we know more about this pandemic. I’m missing teaching greatly as I’ve self isolated in a hotel in Miami until the “storm” passes. It’s a ghost town here with even the hotel pools being closed. So stay tuned…

Meanwhile if you’re bored and feel the need to design, try an online class offered on my website. I’ve enclosed some pics of online students work. With my online classes you pick the type of design you want to make and a full box of flowers is Fedexed overnight from the finest farms and wholesalers in America. You’ll get video access and instruction from me on how to create at least 2 beautiful designs.

If you have any questions on anything send me an email. Ive got lots of time. 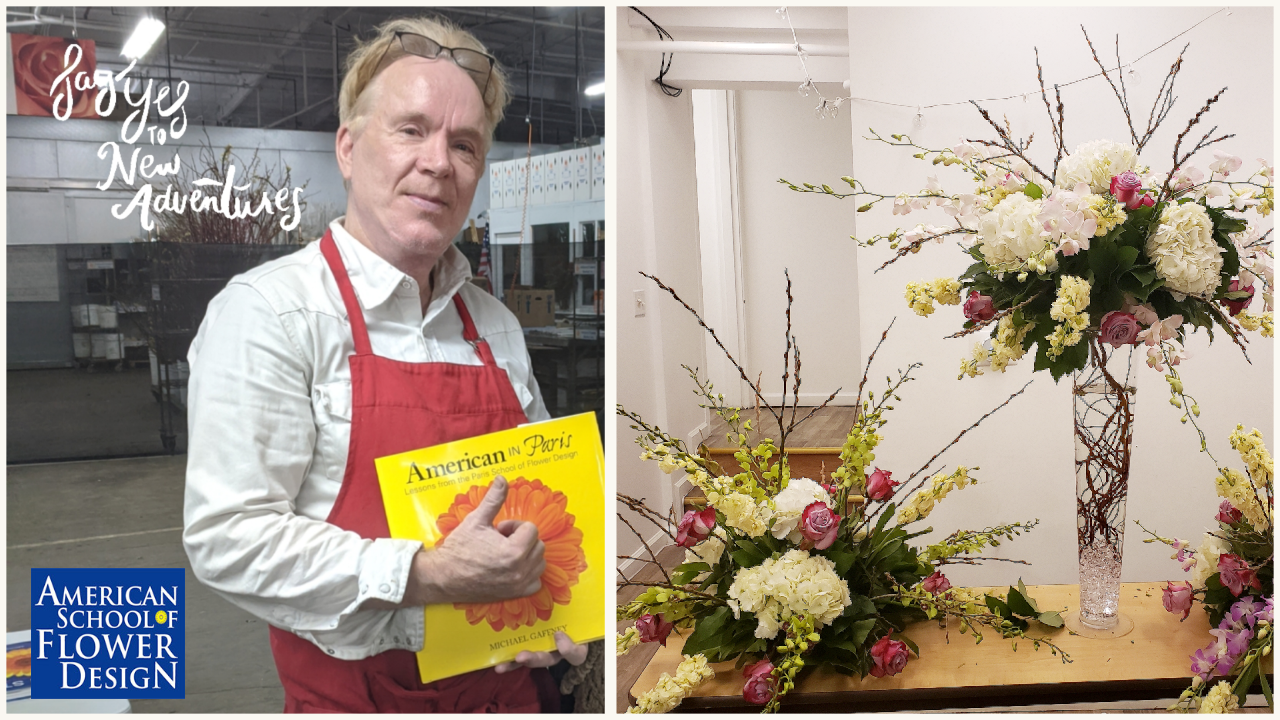 Hello Everyone,
As Valentine’s Day approaches, just a note that everybody is looking for help. If you’re looking for experience, now is the time go to any wholesaler. There are signs on the work boards asking for extra help for the holiday.

I continue to teach classes all over the country and I’m always shocked and amazed at the quality of design. Today, I found the most spectacular work in Carlsbad from my Students. Watch the new videos posted on my YouTube Channel for inspiration.

I now have Online Classes and I can also help you with your Bulk Flower orders by Fedexing overnight flower orders from the great farm fields of California. Everybody needs help with their first couple of wedding orders. Just give me a call and I will send the flowers to you. 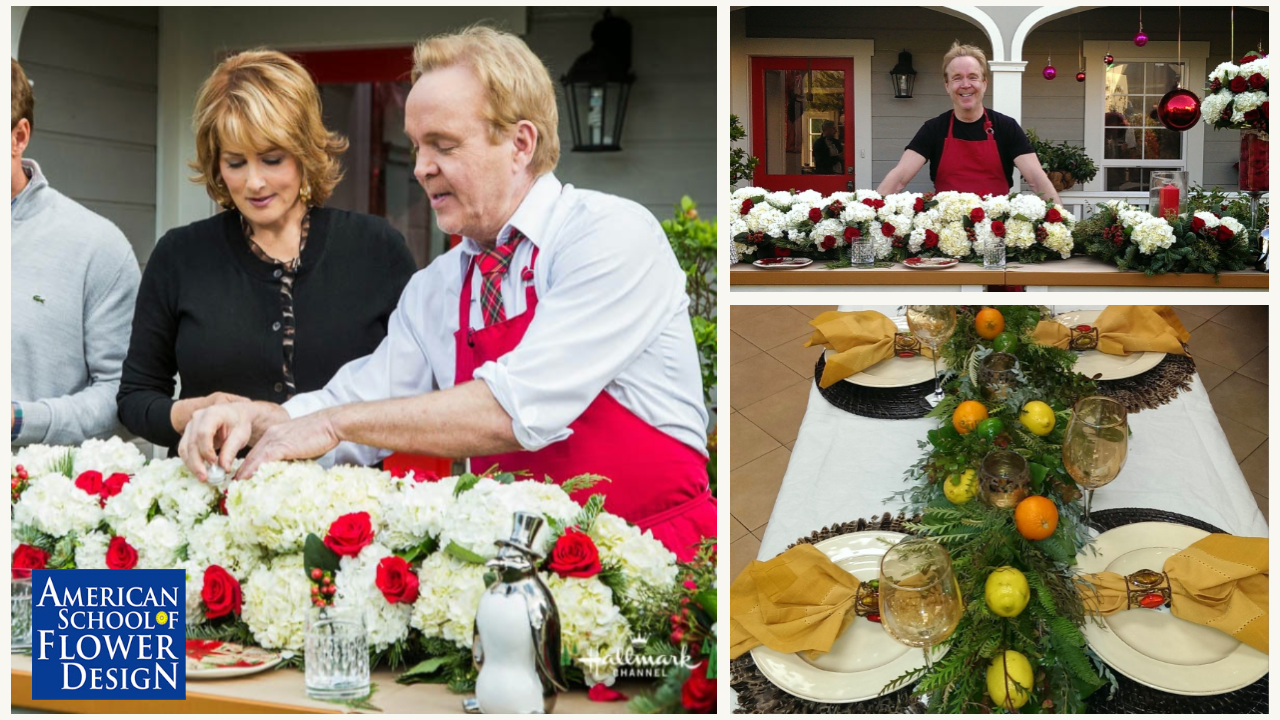 Hi Everyone,
Winter is approaching and I can feel it here in Miami. It’s one of my favorite times of the year for designing. I love the fall leaves and I love pine, cedar and balsam. When you’re designing, your hands are covered with tar from the branches all season long.

I’m in Miami on my way to Los Angeles, then going on vacation in Zihuatenejo, Mexico. I have not been there in 3 years, but previously visited for over 20 years straight. So if anyone’s in the Ixtapa/Zihuatenejo area come visit.

Btw…Masters classes are happening in San Diego and San Francisco. You’ve been asking me for them, so they are being held soon. San Francisco will be the week of New Year’s Eve, a perfect way to celebrate the New Year. I also have a new subscription service which shows you extended videos from flower markets island getaways and classes all available thru the website. I’ve been getting lots of calls lately from people ordering their bulk flowers from me and I’m very happy to help you with your order to figure out what varieties of flowers and how many you’ll need. It’s probably the most difficult thing to figure out when you first start designing.

The other day I ran into a student who graduated 2 years ago from my school. She’s now a superstar in the industry doing the BET awards, Grammy awards and Oscar parties. She’s only been out of school for two years. She approached me with the event designer for a major internet provider, both working on an upcoming $100,000 event!

So on that note. See you in Ixtapa for a seafood lunch. 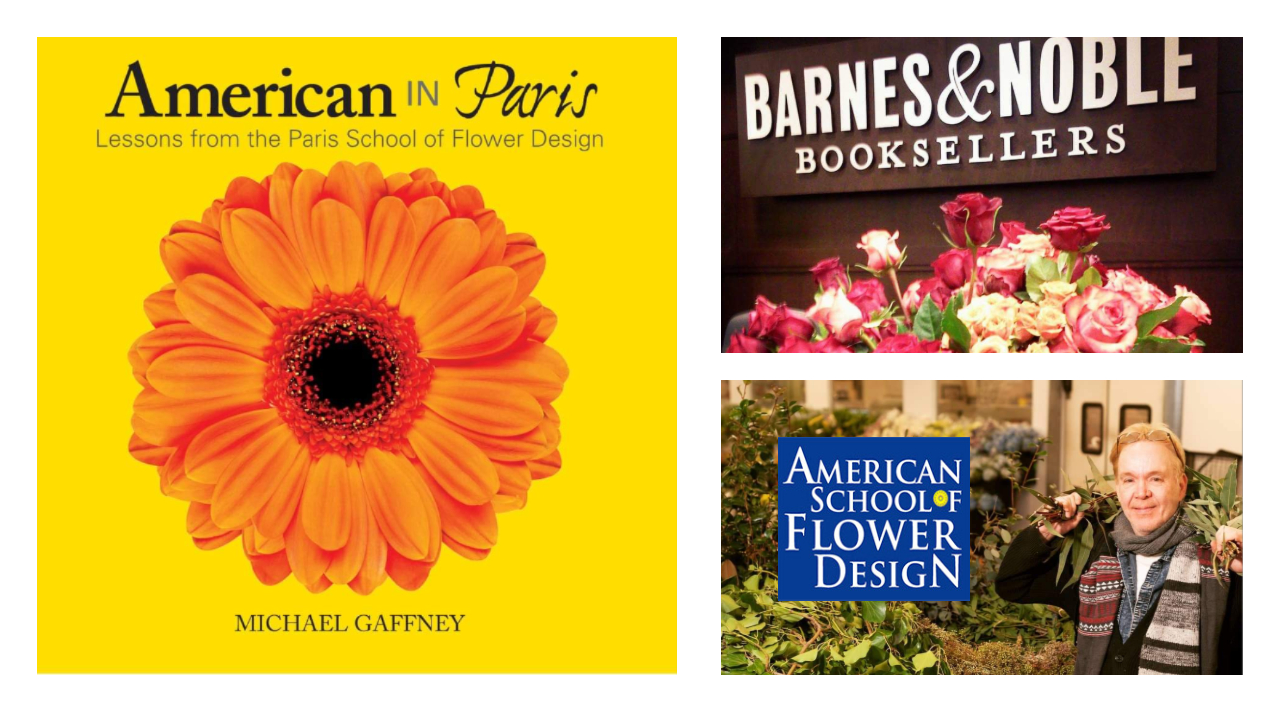 Hi Everyone,
Online classes are happening now if you’re not able make it in-person to one of my 16 schools across the country. You can now take online classes by visiting our website, selecting any of our 12 classes and checking out. The freshest, longest-lasting flowers will be FedExed to you overnight, along with all the materials you need to complete each design. You’ll receive enough fresh flowers to design two great bouquets, valued between $75 to $100 each. Plus, you’ll have access to online video instructions at flowerschool101.com. Order today!

I’m on my way to Los Angeles to do another episode of Home & Family on Hallmark Channel. I’m shooting on Monday, August 5th and the episode will air August 30th. So, tune in for my lesson on long table top summer designs. 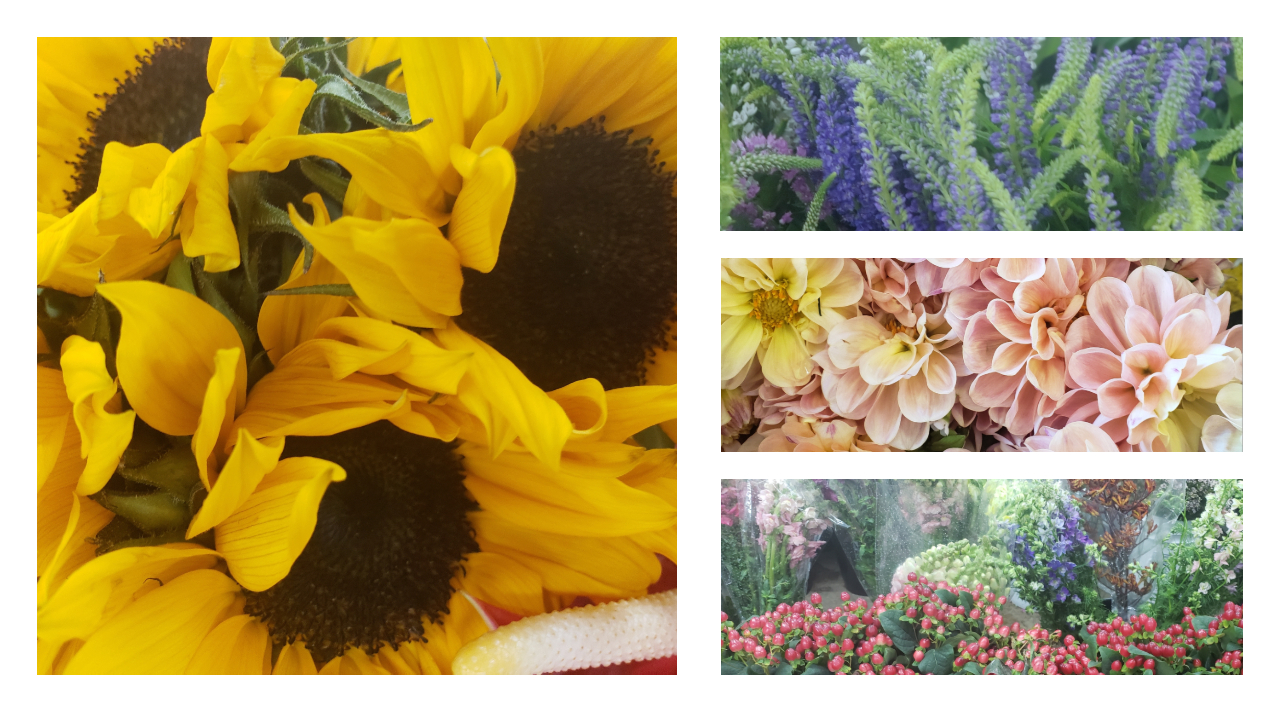 Hi Everyone,
Welcome to summer! Summer is a time for weddings, big beautiful weddings. For those of you who are planning weddings, know that I now have an online shopping mall at my website. You can buy my books, Flower Crazy as well as online classes and bulk flowers. I will personally help you pick out the amounts, give you the prices and Fedex them to you overnight for all your weddings and events.

I think the hardest thing when you’re new at designing is putting together an order for an event. So just call me and I’ll help you, I will also have your order Fedexed overnight at the lowest wholesale prices, direct from American farms and wholesalers.

Also, try my new online classes. I send enough flowers to design two big bouquets, again with the freshest, longest-lasting flowers you’ll find. All Fedexed to you overnight from the finest American farms and wholesalers. 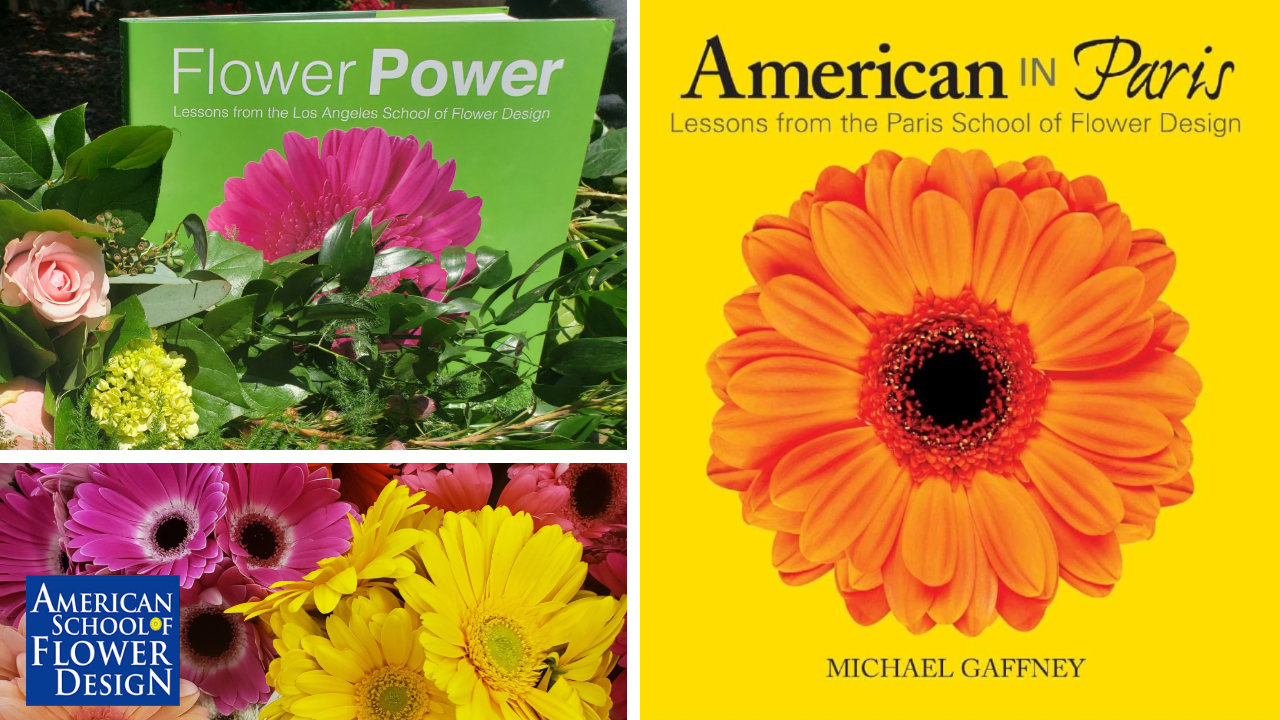 Hi Everyone,
Happy Spring and Summer, I’ve been very busy teaching around the country as usual and promoting the new book American in Paris. Everybody’s been waiting for the new Master’s class schedule. I’ve added Master’s class in four cities this year and possibly more to come in the near future. If there’s a city where you’d like me to hold a Master’s class, just email me.

Coming up, I’ll be on Hallmark Channel talking about peonies. Why I love them and why I hate them. It’s peony season so now is the time to buy.

Check it out…big news
My new online classes are beginning in 2 weeks for those of you who can’t make it to one of my in-classroom workshops. Each online class provides enough flowers for 2 large flower arrangements. Bulk flowers will also be available for purchase along with my books, Bouquet of the Month and much more.

Special Announcement
I’ll be holding a FREE class Friday, June 14th in San Francisco at 1:00 p.m. If you’d like to attend, just submit a contact form on our website.

So, thanks to everybody and stop into a school when I’m in town to say hi. You might get a free class or copy of my new book. 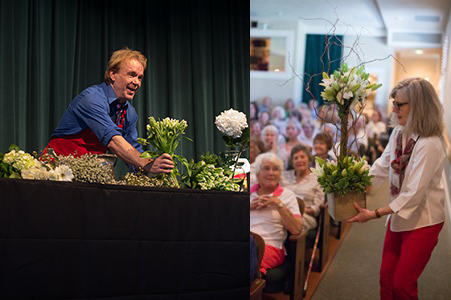 Gaffney entertains Garden Club with tales of weddings past

Posted by Mike Gaffney | News and Press Releases | No Comments

BY CLARE DOYLE – Design star Michael Gaffney gave the Boca Grande Garden Club a “flower-powered” Flower Week to remember. A capacity crowd in the Boca Grande Community Center Auditorium last Wednesday, Feb. 3 roared with laughter again and again as Michael regaled us with tales from his long career as a florist, floral design instructor and celebrity event designer. And while he talked, Michael created!

Roses turned into a bouquet for a flower girl, with his signature method for adding each flower while turning the bouquet so that it had a perfect domed shape. Then the bouquet grew to bridesmaid size as his stories of the demands and color combinations a wedding can bring grew zanier.

His least favorite bridesmaid dress color? Teal. There are no teal-colored flowers in nature, and Michael firmly believes the color of the dress should be echoed in the accent flowers of the bouquet.

When he finished, the bouquet had grown to bridal size, containing two dozen tightly packed roses in a perfect shape. Michael let us know that of the hundreds and hundreds of brides he’s worked with, there is no such thing as a “Bridezilla.” Beautiful flowers made just for them with Michael’s unerring eye and soothing, supportive manner have melted every bride’s heart and made her feel as special as she should be on her wedding day.

Next, he made another rose bouquet with ivy cascading down. Then he turned to centerpieces, from mounded full displays to tall, raised arrangements meant to form almost a canopy over a table. With each one, he provided easy-to-follow steps to achieve professional results, breaking everything down with approachable simplicity.

After his demonstration, a raffle of his designs brought excited squeals from the lucky winners and a few disappointed looks from those who didn’t. But at the workshops he led the following day, all were able to make their own gorgeous bouquets following Michael’s straightforward instructions.

Michael shared his tricks for keeping flowers fresh and beautiful for weeks. He recommended buying them on Wednesdays, because commercial flowers are all delivered on Tuesdays and, as he said, why not take them home, let them drink and keep them in the right environment yourself? IMG_1974

Soak the flowers for 20 minutes before arranging them. Put a little bit of bleach in the water in your vase, but don’t bother with the powdered packets you sometimes get with flowers. Unless you let it dissolve for many hours first, he says it won’t help.

By the way, Michael shared that adding a little alum to your vase is magical for long-lasting hydrangeas.

Michael believes in a product called “Crowning Glory,” which he sprays generously on his finished arrangements to seal the water into the blossoms. He made us all laugh when he squirted it on himself too, telling us he’s actually 105 years old but doesn’t look it, thanks to that spray. Following these steps can make vased arrangements last three weeks and keep a bridal bouquet fresh with no water for two days.

Everyone wants to know when Michael’s coming back, after having had three days of flower-filled fun with him.

For his part, Michael was so enchanted with our island that he had no interest in leaving. Who can’t relate to that? He did promise he would keep our secret and not tell anyone just how perfect a paradise we have here. It was even more so during the Garden Club’s Flower Week.

I was on QVC selling “Flower Crazy”

It’s been an exciting month.
I was on QVC selling my invention called “Flower Crazy“, a flower design system that makes those cubes and cylinders much easier to design with.
For those of you that are event and wedding planners, “Flower Crazy” will your make life much easier. END_OF_DOCUMENT_TOKEN_TO_BE_REPLACED 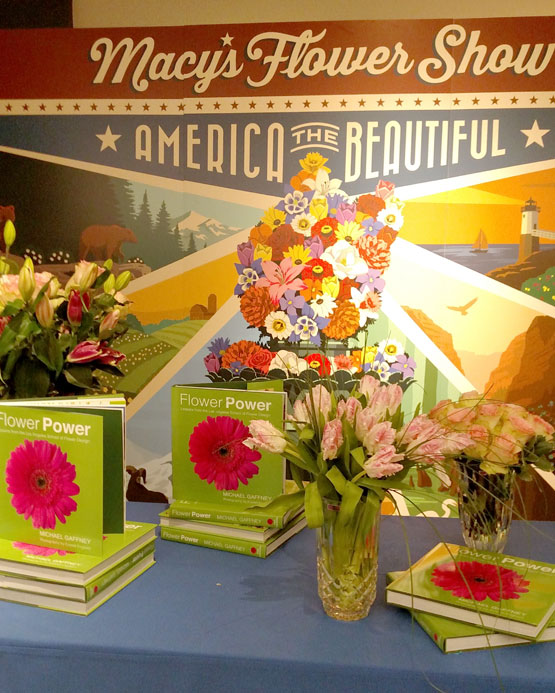 Minneapolis Institute of Art on April 28

My next big presentation will be at the Minneapolis Institute of Art on April 28th at 2pm for their Art in Bloom. Join me if you can. It’ll be a great day. I’m doing a demonstration and book signing. END_OF_DOCUMENT_TOKEN_TO_BE_REPLACED

I’ll also be opening and closing Macy’s Flower Show this year in their flagship Herald Square store in New York City. For opening day, Sunday, March 20th, I’ll be in the in store to do a book signing.
I’ll be back in their flagship Herald Square store on Saturday, March 26th at 1PM to do a Great Plains Wheat wreath making seminar.
Speaking of New York, last week was a great week! Thanks to everybody who supports the American Schools of Flower Design in every way END_OF_DOCUMENT_TOKEN_TO_BE_REPLACED 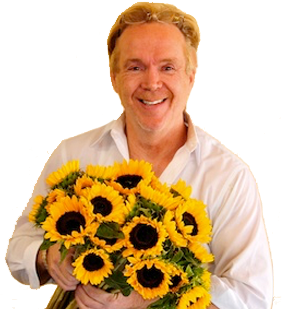 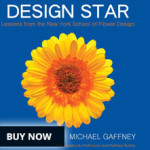